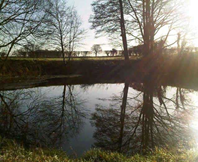 There is a small pond some fifty yards from Heatley Mere which the club have named Little Mere, with about 6 stages from which to fish.

Despite its apparent small size this is a surprisingly deep water which  holds some surprises including some quite sizable bream.